So Reverse Brent Stole, just like many other Hook and Laceration type tricks can be a little tricky to hit at first because there’s so so much going on at one time, so we’re going to be breaking the motion down into two separate steps. And if you practice these two steps separately and then put them together, you should have not too tough of a time learning this trick.

So, step number one, first you want to start with a Breakaway, then you want to take your opposite hand pointer finger and put it underneath the string, just like this.

Then, you want to pull your opposite hand up and your throw hand down just a little bit, so the yoyo goes right above your hand height, maybe about six inches above your hand at most. And while the yoyo is in the air, you want to take your throw hand and whip it in a counterclockwise motion, so the string leaves your opposite hand pointer finger and then whips right back on. So you just hop it up, and then get right back into where you started.

Now, it’s been my observation that it is very important to keep the slack in line with the gap of the yoyo as you’re practicing this part of the trick, and that is the single most effective thing that you can do to make sure that you can hit the green triangle accurately.

So what you don’t want to be doing is whipping the string like this. So you’ll see there’s a lot of forward motion on the whip, but if you really keep it in line, that’ll give you the best chance for success.

Now the second step of the trick is right when the yoyo above your hands and right after the string touches your opposite hand pointer finger, so right after you whip it on. And what you want to do is imagine that you have a hoop between your two arms and including the string. And you want stick your throw hand underneath the yoyo and then land the yoyo inside of the hoop. And when you do that, what you’ll notice is that the slack loop folds over the string that is between your two hands, and then the front of that slack will go into the yoyo, and that is what actually forms the green triangle.

So if you’re having some trouble with this trick, we have some tips for you. The first is to try this trick with a shorter string. I found that it made it much easier to hit, and you may find the same thing. Secondly, you can try practicing on a wider yoyo, that will also help improve your accuracy.

Another very helpful tip is you want to make sure that the yoyo lands as close to the throw hand side of the string as possible. So if you try to land the yoyo with it really far away, it’s going to be much more difficult to hit. But if you get it as close as you can, you should find that you have a much easier time hitting it.

And finally, if you find that the slack isn’t making it all the way into the yoyo, you want to try whipping faster with your throw hand, or you can also try making your whip motion bigger, or just giving yourself a little bit more follow through and if you practice all those, you should be able to fine tune the whip motion so that you can get the slack into the yoyo.

And that is Reverse Brent Stole. 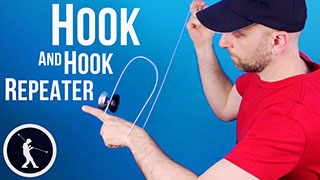 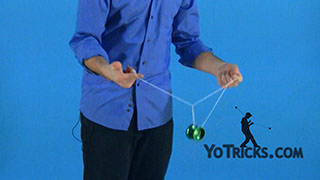