Learn how to do the yoyo string trick Mach 5.

This trick is called Mach 5 and it looks like this. Mach 5, it starts on your front one-and-a-half-mount. Just like Split the Atom, the first thing that you are going to do is pass your opposite hand right underneath the yoyo and catch it on that string. But, instead of bringing your fingers forward into the string like you would with Split the Atom, what you want to do is you want to rotate it right over your yoyo hand and then right back under the yoyo again. So it looks like this. You go under, over and under again.

Let me show you that again. You are going to go under, over, under… do your rotations… and then you are going to bring your hands together and you see you just pull your first finger on your yoyo hand out and that will get you into a basic single mount and you can dismount.

Let me show you the trick one more time. Get it on, under, over, under, do a couple of rotations, you can do as many as you want. Bring your hands together, pull your finger out, do a dismount, bring it back. 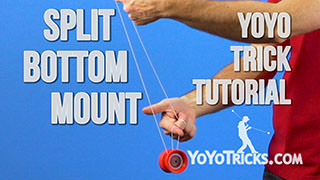 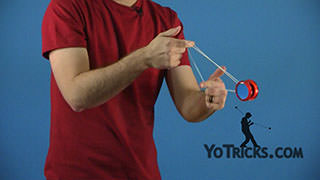 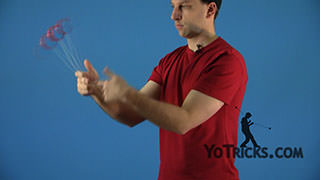