Learn how to do the Green Revolution yoyo trick.

The key is getting your thumb in and twisting the string back and landing it on the right spot while the yoyo is still up in the air. I’ll show you what that looks like. You are just going to do your Reverse Flip, toss it up, catch it on that string. You are going to pinch it and you are going to let the string go with this hand, and then you are going to do your Revolutions. Start to the outside and then go in. Right now the yoyo is in a Green Triangle configuration, which means if I were to let the string go it would get into a knot.

You don’t want there to be any stopping in the trick, when you actually do it, it is just going to be one smooth flow. You go up, cross your hands, catch it, as soon as it hits the string you go into your Revolutions, let it go, catch the yoyo. Then you are just going to toss it to the outside, you are going to dip, kind of back and around with your finger and that will get all the twists out. Land it back on the Trapeze. Then you can just bring it back to your hand.

That is Green Revolution. 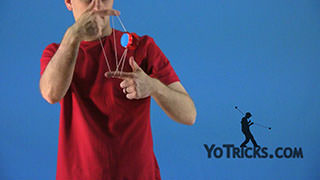 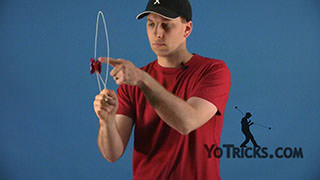