Learn how to do the Jade Whip Yoyo Trick.

Jade Whip Yoyo TrickThis trick is called the Jade Whip, it looks like this.

I am going to show you two different ways to dismount this trick once we get through it. Of course, when you start this trick you want to make sure that you have got all of your string tension out of your string because that is going to make this trick a whole lot easier to learn.

When you are doing that, again, you are going to come back around here you are just going to whip the string in just like this, like I said you are going to get that center string. The key to doing this trick, first of all, is you want to make sure that you are giving yourself enough string when you whip it to actually get down into the yoyo. If you haven’t come down far enough, obviously, it is not going to be able to make it. That can take a little while to get used to pinching the string in just the right place to actually complete the trick.

Once you’ve got that, a second thing that will help a whole lot, is to get used to idea that you really want to stop the yoyo. What I mean by that is, you can see as the string is coming around I have basically stopped the yoyo in its place, obviously it is still spinning, but I have stopped it from swinging back and forth and that allows me to just focus on the whip, getting that motion around, you are just going to twist your wrist like this. Since the string is going to be pinched here, you are actually going to aim with your thumb and first finger to get that string right into the groove of the yoyo. Again, you just pause the yoyo.

Once that string hits the gap of the yoyo you are going to let go where you are pinching it. So you need to pinch it the whole time it is coming through, that will keep the whip open. As soon as it hits the yoyo you need to un-pinch it so that the yoyo can fall back down into the string. Just like that. That will allow you to complete the trick.

Once you have gotten used to the whip motion, once you have gotten it so that you have enough distance that it can whip all the way around it, and you’re un-pinching it at just the right time, you are ready to learn your dismount. You can see right here I have got these three string. This back string is coming off my yoyo finger. All you want to do is roll back onto that string and then you have got this middle string here, you are going to twist your hand in and just roll back onto that middle string. Let the rest of the string off your hand and that will put you back into a trapeze. That is really just the most basic dismount of the Jade Whip, again, you just roll back, roll back, let the string off, just like that.

The second dismount you can do that can make the trick look even more interesting – again, you just start with your Jade Whip – this time instead of rolling onto this back string, you are going to roll onto the front string. Just stick your finger right in here. You are going to roll the yoyo forward and now you’ve got this double string right here. If you roll onto it twice and then let that string off your finger – it is basically just a Ripcord – what’s nice about that is that it sets you up for you bind. Just do a normal bind out of it, just like that. Again you are just going to, kinda, roll forward three times. One, two, three, let the string go. Go back into your bind.

The Jade Whip, a lot of people have a really difficult time learning it, because there is a lot of finesse that is involved. It should help a lot if you learn to control the yoyo and stop it like I was showing you earlier. For some people, it is going to be even easier to learn if they have learned the Iron Whip first, but for the most part I usually teach the Jade Whip first because I have found that to be a little bit easier to do. It is a great trick for combos, it is a great trick on its own, so it is worth the effort to put into it.

That is the Jade Whip. 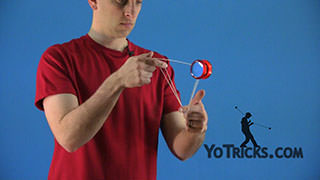