Learn how to do the Fury Cake Yoyo Trick. 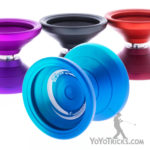 Fury Cake Yoyo TrickThis trick is called Fury Cake, it looks like this. Just like that. Now the first part of this trick is just a new way to get into your Wrist Mount, so we’ll start by just learning that. Then we will start the second part of the trick in the rest of the video.

To start with, you are going to throw a 1.5 Mount and you’re going to start just like the beginning of Branding. Instead of wrapping the yoyo around and finishing the Branding, what you’re going to do is use your throw hand thumb to split the strings coming around your index finger and your going to roll the yoyo onto the back string.

After you do that you can slide your throw hand into the loop and you’ll actually be in a normal Wrist Mount. From the Wrist Mount, you’re going to do one underpass, and then this part is a little bit tricky, but your going to pop the yoyo up into this top string and over your throw hand. Then you have to swing the yoyo in front of your throw hand and lift the yoyo behind all of the string.

And that will get you into a different type of wrist mount. There’s a slight twist in it, and also if you just drop out like normal you’ll end up with a knot. I’ll show you from a different angle.

In the wrist mount, we do our underpass. Lift up the yoyo into this top string and go over your throw hand and then let the yoyo and the string pass in front of my throw hand. Then lift it up and behind the other strings. Then from here, I’m going to take this string that I’m holding with my opposite hand and I’m going to put it back over my throwhand wrist. And like I said, that puts you into a wrist mount that has this little twist which is where you want to continue on with the trick.

Once again you’re going to do an underpass. Then from here you’re going to put the palms of your hands into the string up like this, and you’re going to rotate the yoyo over your opposite hand and then in between the two hands. That will get you into this string formation here.

You’re going to go over your opposite hand’s finger once. Then over your throwhand. Like this. And then you can pick the yoyo up, like so, and you actually have to take the thumb and finger on your opposite hand and use that to unwind the string around the yoyo one time. And that puts you into a mount that you can actually come clean out of. It looks like there’s a knot, but if you raise the yoyo straight up and then set it down on the center of the string, and then what I like to do is bring the string over so it kind of pinches on my index finger, and then you can slowly pull it out and you’ll see you’ll get out without any knots.

I’ll show you that last part again from a different angle. So, we get through here, hands up, the yoyo comes around. So, we go over the opposite hand, over our throw hand, and then we unwrap the string from the back of the yoyo with our opposite hand one time. That allows us to lift the yoyo up and set it down and then, of course, pull the strings out so you get right back into a normal trapeze.

Once you’ve got it, you’ve just got to put everything together. And that is how you do Fury Cake. 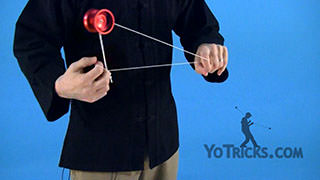