Learn how to do the advanced 1a yoyo trick Superman.

Superman Yoyo TrickThis trick is Superman, and it looks like this:

Lastly, you are going to want to practice this part of the trick because it is probably one of the hardest parts of Superman, assuming that you already know the Magic Drop portion. One way that you can practice this part of the trick is you can actually bypass most of the trick by doing the through triangle here, and not performing the double-on and Magic Drop, and just going directly into this modified Double or Nothing mount in the Spirit Bomb, and then you can go directly to the through triangle from here. You can skip the double-on and Magic Drop.

From there, after you get finished with the through triangle, you can then dismount like you would in Spirit Bomb, drop the strings off of your throwhand, and that concludes the trick. 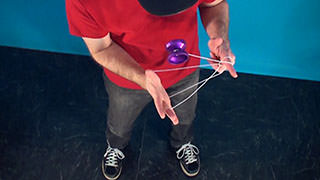