Learn how to do the yoyo trick And Whut.

And Whut Yoyo TrickThis trick is called And Whut, it looks like this.

This trick, I am going to break it down into three parts for you, and that’s nice because each part can be practiced completely by itself. Once you get it you can put it together. The first part, start off in a Houdini Mount. You are going to double on over your non-yoyo hand’s index finger. You can do this two different ways. I see some guys, they just double on the string like that. Other guys, they will actually, instead of doubling on the string they will actually miss it, so it is more like putting a wrap in the yoyo, which I think is actually the proper way to do it. From here you are just going to let go with your thumb, and you are just going to unwrap the yoyo and you are right back into a trapeze.

If you want that part of the trick to look nice, it is good to try to get it into a nice fluid motion. So get that wrap and that unwrap into a nice motion. So again, from here, wrap, let go, and unwrap. It will take a little bit of practice to get it fluid, but it really helps to make the beginning of the trick look a lot better.

From there, the next part of the trick, you ended in a trapeze, so what you are going to do is just toss the yoyo over to the side, get into a One-and-a-Half-Mount, and this next part is a lot like in Buddha’s Revenge, where you throw the yoyo around both fingers. You are going to take your non-yoyo hand’s index finger, and push it into both stings, and you are going to pop the yoyo out and actually just miss all the strings.

I’ll go ahead and show you guys that from an angle here. From here, swing around both hands, push into the string, and again just pop right out, missing all the string. You will notice there is an extra wrap around my index finger. So what you are going to do is pinch that and pull it through all the strings. Now this back string, your just going to take and you are going to place right into the back of the yoyo. Take your freehand’s index finger here, hook on the string. Unwrap your throwhand’s index finger. You will notice that you are in a Green Triangle in what looks like a Trapeze and His Brother Mount. You’ve got a gap here in-between the strings, and you actually have to pop the yoyo out of the back of the triangle through that gap, landing in a Trapeze and His Brother mount.

So that’s the second part of the trick. You can practice that and get it down. To do the third part, you can actually start right from a Trapeze and His Brother. What you are going to do is just start by tossing the yoyo off to the side. Just like you are going into a One-and-a-Half-Mount, but instead of mounting the yoyo you are going to throw it into the top string and then land it down on the bottom one. So again, as it is coming around, up into the top string, down into the bottom. From here you are going to do a Jump Rope. A lot of people, they kind of get messed up with this trick because they think that you are going to Jump Rope with all the string, but that just kind of makes a jumble of string. What you are actually going to do is you are going to Jump Rope with just this bottom string. That’s the only string that goes around this yoyo. So, you are going to pop the yoyo up, and just this bottom string is going to go around the yoyo and land. So I’ll show you what that looks like. Just like that. It doesn’t look like you did much, but there is a little twist in the string. What that will allow you to do is to roll into this front string over here, and that puts you right back into a Green Triangle when you pull your index finger out. Again, right inside that Trapeze and His Brother Mount. You pop out the same way, out of the back of the Green Triangle, in between this loop, right into your Trapeze and His Brother Mount.

That’s the whole trick. Again it helps if you practice each part individually, and then you can put it all together. I’ll show it to you one more time.

That was And Whut. 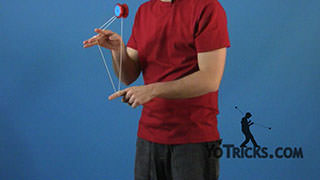