Learn how to do the cup transfer Kendama Trick, Moshi Kame

Moshi Kame Kendama TrickThis trick is Moshi Kame, and it looks like this:

Just like that. It is a pretty simple trick. You are just going to start in a Sara Grip which we detail in our How to Hold a Kendama Video so go watch that.

Each time that you change to a cup, that is considered one count. When you start practicing this trick, you are going to want to go at a slow pace, but as you get better you want to speed up. According to the Japanese Kendama Association, this trick should be done one hundred thirty five times per minute so that’s one, two, three, four. If you want to time yourself, it will average out to ten times every four seconds. That is a good way to practice that. And that is Moshi Kame. 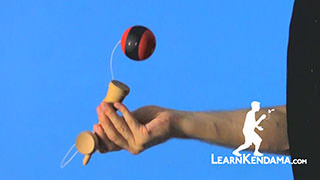