Juggle Kendama TrickIn this video, we’re going to be teaching you the kendama trick known as Juggle. It looks like this.

Now, in order to do this trick you want to make sure you know the trick Ken Flip. It’s very vital to this trick. So, make sure you go and check that video out that we did and learn how to do that first.

The second part, you’re going to pop up the tama and then you’re going to perform a Ken Flip. It looks like this. Practice that. You really want to get the hang of this because if you master this part, just the two separate motions, it makes the rest of the trick a lot easier. Practice popping the tama to the height of the sarado and Ken Flipping.

The third part, you’re going to, after the Ken Flip, hit the tama back up in the air. You don’t want to hit it to high up or else it’ll make it too hard to catch. You only want to give it a slight little pop so that it will go to about this height. After you pop it, you then want to go back and catch the ken flip. It looks like this. Make sure you keep practicing this. Even if you don’t catch the ken perfectly every time, you still want to get the momentum for this down because the momentum of this is what’s difficult. Just popping up in three separate parts. Pop the tama, flip, and then hit.

Once you’ve got that down, the fourth part is, after simply hitting the tama, catch the ken flip and catch the tama on the Big Cup. It looks like this.

And that is how you do the Juggle. 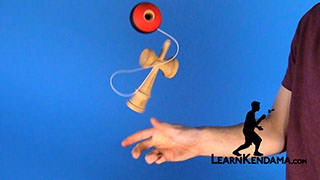