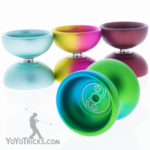 5050 Yoyo Review Yoyo TrickThe 5050 is a new addition to our Craft yoyo lineup from Dressel Designs. It’s got an unusual shape, it’s lighter than the vast majority of yoyos, and it even uses an unusual sized bearing. In other words, it’s everything that make craft yoyos awesome since you can find amazing things in unexpected places.

In terms of design, the 5050 is what’s known as a 1:1 yoyo which means that the width and diameter are the same: 50mm. It is also about 10% lighter than most yoyos, coming in at just under 60g. It also has this very nice wide rounded shape. If you put all of that together what you find is a yoyo with unmatched comfort, not just in terms of holding and throwing, but also during play because it is so light it is really easy to move around, it also plays pretty quick, but since it has a wide design it also tends to stay on plain during tricks, which means it is really great for both big tricks, but also for really intricate tricks maneuvers as well.

The 50/50 also features a type D bearing, which is smaller than the type C bearing found in most yoyos. What this does for you is it makes Slackicides a whole lot easier, since smaller bearings make that trick easier. It gives you a greater sense of connection to the yoyo as it is winding and unwinding. And three, It eliminates some of that Thud at the end of the string as the last bit of string unwinds from the yoyo. you feel on larger bearing yoyos when the yoyo gets to the end of the string, which just makes the whole experience a lot more enjoyable.

It also has spikes on the inside of the cups, which are great for matador style tricks.

Taken as a whole, the 5050 is a unique yoyo that I think you will be coming back to again and again as you play, and it will definitely stand out in any yoyo collection.