Learn how to do the Drop Trapeze, and ambidextrous 5A repeater trick which teaches an important way to return the counterweight to the hand.

Drop Trapeze Yoyo TrickThis trick is called Drop Trapeze, and it looks like this:

Drop Trapeze builds off one of the tricks in our 5A Fundamentals Series, which is called Switch Trapeze, and it looks like this. As you can see, during Switch Trapeze the counterweight is never actually free of my hands. All I am ever doing is transferring it from one hand to the other. But Drop Trapeze is a bit more of a step up. Actually I have to rely on gravity to keep the timing of the trick correct, and the yoyo and the counterweight both have their own momentums, which makes this trick a bit more involved.

If you are having some trouble with this trick, there are a couple things to keep in mind. The first is that you do not want to hop the yoyo up. So you do not want to be doing this. That actually makes the trick more difficult to learn, so you really want to focus on just gently swinging the yoyo and not popping. The other thing is that because this is a completely ambidextrous trick, you might find that one side is really smooth, and the other side is actually more difficult. That is just something that you need to adjust to with more practice. And that is Drop Trapeze. 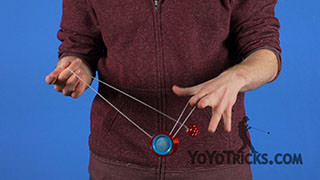 Switch Trapeze and his Brother