Learn how to do the Reverse Bee Sting freehand yoyo trick.

To learn this trick, you need to know how to do regular Bee Sting, so if you have not learned that one, you are definitely going to want to go back and watch our 5A fundamentals series.

Starting from a trapeze, you want to bring the yoyo nice and close to our opposite hand pointer finger. Just like with regular beesting, if the yoyo is too close to the counterweight, is going to make this trick much more difficult to perform.

Reverse Bee Sting is a really important trick to learn because this element comes up a lot, especially in advanced 5A tricks, so this is one that you are definitely going to want to master. And that is Reverse Bee Sting. 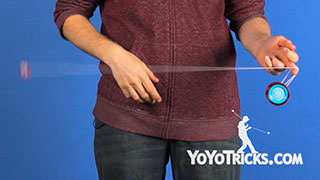