Learn how to do Alternating Triangles, a repeating 5A trick that builds off of the Electric Triangle

As you can see, this trick is a repeater, and you can do it as many times as you want. My personal record is 23, and as you get better with this trick, you will be able to do it more and more times.

At first glance, this trick might appear to be perfectly symmetrical, but there is actually a bit more nuance to it, so let’s break it down.

From here we are going to take our throwhand and remove our pointer finger and our middle finger from this triangle, so that the string is only hooked around our ring finger and our pinky, with the back of our hand facing outwards.

From here we are going to hop the yoyo out of the front of the triangle. As the yoyo is in midair, we want to take the counterweight and throw it behind the string leading directly to the yoyo. As the counterweight is coming over, we want to catch it in our throwhand between our thumb and the edge of our hand right here. So we are going to pop the yoyo up, throw the counterweight over, and catch it like this. As the yoyo starts to fall, we can take the bottom of our opposite hand, tilt it toward ourselves, so the yoyo can come over this top string, landing on the back string leading from our opposite hand pinky. Then we can take these bottom two fingers on our throwhand and take them out, revealing the second Green Triangle.

From there, we need to get back to the other side. That looks like this. So we are just going to take our thumbs, stick it into the triangle, and take these four fingers out. Then we need to hop the yoyo out the back of the triangle. Throw the counterweight to the front, and catch it with our 4 fingers on our opposite hand, just like that. Just like with Electric Triangle, we can take the bottom of our throwhand, tilt it forward, and land the yoyo on the string leading from our pinky. Take your thumb out, and there is the triangle.

I find that the easiest way to dismount from this trick is to get over to the triangle where the counterweight is held in your throwhand. Then just hop the yoyo out the back, landing it into a Trapeze, going into an undermount and performing a bind. And that is Alternating Triangles. 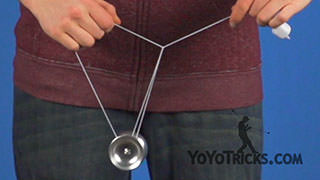