Stay up to date with the latest yoyo news from YoYoTricks.com, this week we review yoyo performances from Gentry Stein, Mark Montgomery, Tessa Piccillo, and Philip White on the Steve Harvey TV Show, while Jake announces restocks of the Duncan Skyhawk and newly redesigned Yoyofactory Edge yoyo. 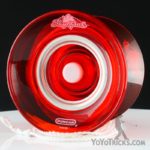 Weekly Yoyo Update: Steve Harvey Learns to Yoyo + Product Restock – 1-17-18 Yoyo TrickWelcome back to the Weekly Yoyo Update, this is Christopher Chunn bringing all the latest yoyo news to you, on a bi-weekly basis, or otherwise, whenever there is something for us to talk about.

This week we’ve got some product restocks, refreshes, and price drops, not to mention the instagram contest results, and a few surprises along the way, but first, our top story. Yesterday some of our friends made a huge splash on the Steve Harvey TV show. First off, our very dapper friend Gentry Stein introduced Steve Harvey to the world of modern yoyoing, and even taught him the correct way to throw with his very own Replay yoyo. Nice going, Gentry!

Then, they followed up with a yoyo performance battle, featuring the 2003 AP World Champion, Mark Montgomery.

Gentry Stein: We have Mark Montgomery right here, he is beatboxing while he is yoyoing, this is actually what he did to earn himself the world title in the Artistic Performance division.

Mark was up against the current Women’s World champion, Tessa Piccillo, as well as 4A national champion, Philip White, who really wowed the crowd with the Jetset EG yoyo, winning himself a brand new motorized scooter. But Tessa also went home with something to write home about, earning herself a classic Steve Harvey gaffe, check it out:

And now, let’s send it over to Jake.

Thanks Chris. Of course, long time fans of yoyotricks.com will know that the Replay Pro gentry was using on the show is available now on the yoyotricks.com store. Isn’t that right, Chris?

That’s right, Jake. Not to mention, the Jet set EG used by Philip White to win that motor scooter, is also now available on the store as well. Now, let’s take a look at what else is new in the store.

Well Chris, we’ve just gotten in a brand new, long awaited restock of the Duncan Skyhawk yoyo. This is one of our favorite offstring yoyos, and we know that you’re gonna love it. Don’t forget that National Champion Zac Rubino has a tutorial series with the Skyhawk on our channel, so if you’re looking for some new tricks to learn this new year, maybe check some of those videos out, they are great.

Also we are excited to announce that we just got in stock the newly redesigned Edge yoyo, with a new low price of just $79.99. This Edge has been slightly tweaked since the last version to have a few extra grams of weight to make for even more impressive spin times. You’ll be amazed with how much better this version plays, while still retaining that outlandish enthusiasm Evan Nagao established on the original Edge yoyo. The splash and acid wash colors on the new edge are really stunning, we think you’re going to have a hard time putting this yoyo down – because it’s a yoyo, and it comes back up. And don’t forget that Evan teaches some crazy impressive tricks in his own tutorial series; if you haven’t tried learning some of those tricks yet then you are truly missing out, they’re fantastic. And now back to Chris for the Instagram contest.

The #YoTricks2017 instagram contest from last year is now closed and we have a winner! Congratulations to @lianflrs_ who showed off this interesting way to get into a Green Triangle. Check your instagram DMs to claim your prize. Stay tuned at the end of this broadcast for more of our favorite entries.

For next week’s instagram contest, we want you to post a video of new trick that you are working on learning in the new year. Make sure it’s a new trick you’re still working on learning, or you won’t get any points if you show us an old trick, we can tell the difference. Be sure to use the hashtag #YoTricksNewYear when you post your trick on Instagram.

For the full list of official contest rules go to YoYoTricks.com/InstaContest. This weeks contest winner will receive a $25 gift card to YoYoTricks.com, and remember, the winner is randomly selected, so even if your video isn’t the best, you still have a shot at winning. And don’t forget, we will be featuring some of our favorite entries at the end of our next weekly yoyo update.

And last, but certainly not least, we are very excited to announce that after a long and inexplicable hiatus, the illustrious Adam Bottiglia will be returning to the Weekly Yoyo Update in our next episode for a special event where he will reveal and discuss his top 5 favorite yoyo contest freestyles of all time. Do you have any idea which routines he might pick? Let us know what you think in the comments section below.

This is Christopher Chunn signing off, reminding you to … uh, don’t forget to come up with a witty quote before you start signing off. We’ll see you next time.