This week we announce the release of The Wedge Yoyo and a new series of tutorial videos featuring National Yoyo Champion Evan Nagao, in addition to the Mideast Regional Yoyo Contest coming up on June 9th. Plus, the #YoTricksProud Instagram contest results. 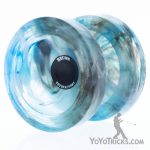 And that concludes our final Instagram contest for now. A huge thanks to everybody to entered and congrats to those of you who used these contests to push your skills even further.

This is Christopher Chunn signing off, letting you guys know that I was once addicted to the Hokey Pokey. Thankfully, I managed to turn myself around.