Stunt Plane Kendama TrickThis trick is called Stunt Plane. Here is what it looks like. Just like that.

To do this trick you’re going to start off by holding the kendama in a modified tama grip, but this time, where we normally have the hole facing upward, we’re going to turn it upside down so the hole is facing down. You want your ring or your middle finger right next to the hole on the tama. You can see with the LK Standard, I’ve got my fingers pinched around the side, so that they’re right on the stripe, and I use my middle finger, that’s what I prefer.

This is important because your use your finger as a guide for spiking the ken. Once you have a hold of the tama what you’re going to do is let the ken hang down and we’re going to do a motion similar to the Pull Spike, but, of course, this time we’re pulling up the ken.

To do this you’re going to use, again your middle finger as a guide, aim it and just slide it right onto the spike. Once you’ve done that, at the exact time that you’re spiking it, you have to make in inward motion with hand and point the ken upward. It’s a little bit of a tricky motion, but we have a trick called Down Spike that we’ve made a video for and that motion is the same in that trick, but it’s a little easier to learn the motion on that trick. If you haven’t already go check out that video and learn Down Spike.

Another thing about this trick is, as your doing that turn, you shouldn’t ever make contact with the ken. You shouldn’t be holding it or balancing the ken with your hand. All the contact is made only with the tame. You should be able to make the turn and everything without grabbing onto the ken.

Once you’ve got all of that, let it hang down, pull it up, spike it, turn it, and that is Stunt Plane. 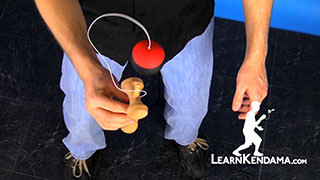 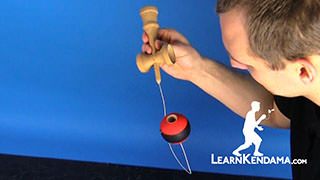