Two-Handed Around the World Yoyo Trick

Two-Handed Around the World Yoyo TrickWhen you’re getting into your two-handed tricks, an easy place to start is with two-handed around the worlds. In this video I’m just going to show you a couple variations.

The first one is also the easiest; just to do two at the same time, just like that. Once you get that you may want to move on to alternating around the worlds, like this.

From there, you can move on to one forward around the world and one in reverse. This one actually looks really good in a profile, and, what I tend to do, is do the reverse with my dominate hand because that’s the more difficult trick. It looks like this.

Finally, the last trick is to do a side to side around the world with both hands. You want to make sure to start with one and then bring the other one in so they don’t collide. It looks like this.

Those are just a couple variations of two-handed around the world to get you started. 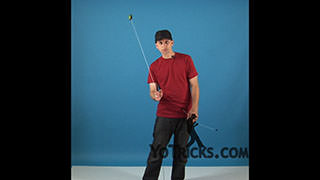