Learn the Evergreen Yoyo Trick in this tutorial from World Champion Tessa Piccillo.

Evergreen Yoyo TrickThis trick is called Evergreen and this is what it looks like.

So from here you are going to dismount the yoyo and curl your wrist in, then bring your arm over your head like that and swing the yoyo all the way to the other side, catch that string on your elbow right there and land into a brother’s mount and slide that string down your wrist to set yourself up for the Trapeze and Brother Slack.

So from here you are going to pinch the string on your index finger and slack the string over and catch it on your non throwhand wrist. Then have the yoyo go over your wrist and into that top string, drop the loop connected to your throw hand, then unwrap the yoyo with your throwhand. Then you are going to do a Pull-Over Loop Wrap by having your wrist go in and over the string and as it comes over the second time, grab the string with your hand and let the yoyo continue to go all the way over and lay on your throw arm. Then you are land the string in between your two hands, like that, to make a modified Wrist Mount.

So from here you are going to want to make sure that both of your hands are facing downward and that your throwhand is completely inside of the loop as well as your thumb in the back, and what you are going to be doing here is popping the yoyo up and bringing all of the strings all the way around the yoyo unlike in And Whut where you bring just one string around the yoyo, so your hands are going to be going from the back, up and then out. So it is going to look like that. It is going to be in the same mount that you land in except that the palm of your throwhand will start facing out and then will end up facing inward.

Man on the Flying Trapeze and His Brother Slack 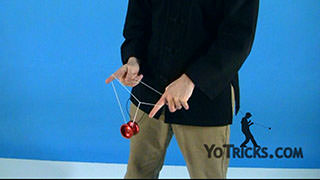 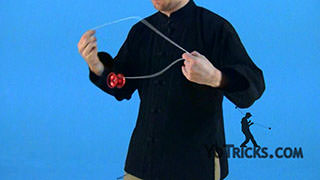