Candy Rain Yoyo TrickThis is the trick Candy Rain, and it looks like this.

To start this trick, before you even attempt to do any parts of the trick recall from our video The Trapeze and His Brother that there are two different ways that you can do Trapeze and His Brother. Number one, you can have an outstretched finger, whether it be your pointer finger or your middle finger outstretched, to intercept the string and catch it on the Trapeze and Brother. The second way is after you dismount from the Trapeze you pinch or curl your index finger in to hold on to the string to land it on the Trapeze and Brother. In Candy Rain, that concept of dismounting and swinging to the other side and catching it on the outside string with your index finger, is going to happen seven times in the trick so it is a good idea to keep in mind which of the two techniques I am using.

Second of all, when you do those harder variations of Trapeze and Brother in Candy Rain you are going to be dealing with a whole lot more strings, so it is a good idea that as soon as you go for the index finger and you try to land it on the outside string that you move all the string on your index finger back except the one you need to land on the string. That will help you immensely with all the parts of Candy Rain.

Alright, to start this trick you are going to start with a Trapeze and you are going to set yourself up for a Magic Drop, but instead of rejecting it and landing on the back string your in between your two hands you are then going to push the yoyo out to the outside of your body and drape it over top of your opposite hand, not just on top of your pointer finger but also pick it up with the thumb of your opposite hand as well.

The second tip I can give you for this element is, sometimes when you go for the Magic Drop sometimes the string will slide up on the wrist of your yoyo hand and when you land on the outside string and go for the drop you will still end up with a wrap on the wrist of your yoyo hand. What you can do to avoid that is, if you do feel the string sliding back on you as soon as you do the Magic Drop you can just point your hand down and pull these three fingers out of the way the entire trick stays on just your thumbs and your index fingers before you even go for the outside string here.

From this mount, this is actually a similar mount to doing a Slack Trapeze, and you will end up in pretty much in the exact same mount, except the string over your wrist will actually be up on your index finger here, like so. From here you are going to do a similar dismount to Slack Trapeze, except this time you are going to be picking up some string segments with your hands. You are going to be swinging it around and picking up the string segment with your thumb of your opposite hand and with the index finger of your yoyo hand.

That will take you to a Houdini Mount. From the Houdini Mount we are going to essentially do what is a Houdini Mount and His Brother. Just swing it over and hit a brother mount with it. You are going to drop the string that is not on your thumb on your opposite hand like this, and now you are in pretty much the same mount you were in when you do White Buddha, except the difference is that in White Buddha the string is on your index finger, but here it is going to be on your thumb. The difference is that when you swing it around both your hands, like this, the transfer is not going to be on your index finger and then you are going to curl it in like you do in White Buddha, instead it is going to be starting on your thumb and then after you swing it around both your hands it is going to transfer to your index finger like that. The way to cheat at this is, you can think of it as you are going to make a circle with your opposite hand like this, and as you swing it around it will naturally just fold itself over onto your index finger like so. That will take you to a Trapeze and His Brother for the second time.

From here we are essentially going to be doing a repeater trick. From the first Trapeze and His Brother to this one here you can treat that like a repeater trick, so we are going to repeat it again  but this time we are going to add a variation to it. We are going to get back into the Houdini Mount, just like you would before, and then this time, instead of getting into a Brother Mount, you are going to swing it around your hands one more time, and once you hit the index finger of your opposite hand the second time bend your middle finger that has that string, bend it in, so that way you can get that string out of the way and then hit the mount right here on your yoyo hand. From here you are going to drop the string from your middle finger on your opposite hand, and from your thumb, and get back to Trapeze and its Brother for the third and final time in Candy Rain.

With Candy Rain, probably the biggest takeaway that you can get from Candy Rain is that you have got to learn how to manipulate the strings between your fingers, not just in general, but while the yoyo is moving, while you are doing all that stuff between your fingers. Really practice getting the fluidity of Candy Rain down and you will start to gain some more dexterity in your hands, and it is a great fluid trick.

And that is Candy Rain. 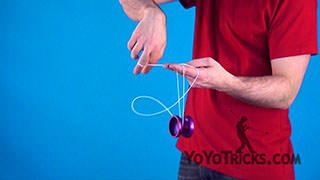 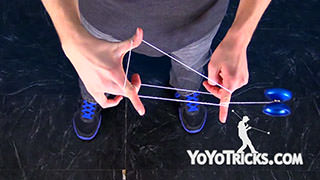