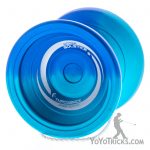 In this video, I am going to teach you how to do the trick Eli Hops, which looks like this.

I am also going to teach you the techniques on how Eli Hop works, so that you can learn how to do it in pretty much any direction you want. So, to being, all you need to do in order to be able to do Eli Hops, is know how to throw a Trapeze. If you don’t know how to throw a Man on the Flying Trapeze, that will definitely help you out because you need that to start the trick. Also, it is going to be a little bit easier to learn the trick if you have a wider yoyo, just because it is going to be a little bit easier to aim with a wider yoyo and actually make it onto the string. Finally, if you have an unresponsive yoyo, a yoyo that does not come back up when you pull on it, that just allows you to be a little bit more sloppy when you are getting started. You can do Eli Hops with a responsive yoyo, but your technique needs to be really solid, but if that is all you have you can still learn how to do the trick.

To do Eli Hops, the motion for it is really, really simple. All you are going to do is just start with a Trapeze. You can see that I am keeping the yoyo a little bit closer to my opposite hand. All I am going to do is pull my hands apart slightly, and then I am going to bring them back together almost immediately. If you do that the yoyo should hop right off the string. As the yoyo starts to come back down you just pull your hands apart. What you want to do is land the yoyo very closely to your opposite hand. That allows you to aim a little bit easier with less room to miss the string.

When you are doing this, one thing that might be obvious, maybe it won’t be to you, you don’t want any forward or backward motion on either of your hands. If you do that, then the yoyo is no longer going to be aligned with the string – so imagine if I just push my yoyo hand forward a little bit, it is always going to miss the string. If you are missing that could be something that you are doing wrong; you are just moving your hands forward and backward a little bit.

Now the other thing, if you are missing on your catch, it could be that you are allowing too much slack in the string. You can imagine if there is a lot of slack in the string then it is going to be bending and folding and there might not be a platform for the yoyo to land on when you are attempting the trick. So try as best as you can to keep your hands far apart enough so that there is no slack in the string throughout the motion of the trick, and you will have a lot more success.

Now it is possible that you are attempting this trick and the yoyo just isn’t going anywhere close to what you want. Now I am just going to focus on some of those problems that will happen, but while I am doing this I am going to show you the mechanics of how Eli Hops works. That will allow you to do Eli Hops in other directions as well.

As I already mentioned, the first thing that you want to do when you do Eli Hops is just pull your hands apart. I also mentioned that you need to bring your hands back together almost immediately. Think about this, if you were to just pull your hands apart, watch what happens. The yoyo just comes right off the string. It does not come off vertically, it actually orbits around your opposite hand first finger. But the yoyo actually doesn’t want to move in an arc. At any given point the yoyo really wants to move in a straight line. The reason why the yoyo wants to move in a straight line but can’t is because there is no slack in the string. So, instead of continuing to move vertically up, it is going to be attached to the string, so it is going to be forced to bend and curve around your finger. The thing you can do to control where the yoyo goes, is you can give the yoyo some slack. This is why we tell you at first you have to pull apart to get the yoyo moving and then immediately move your hands back together. Whenever you give the yoyo some slack, whenever you start to move your hands back together, that is going to allow the yoyo to continue to move in the direction it was already moving.

But how do you know what direction that is. If you think about the yoyo and it s relation to the first finger of your opposite hand. Imagine that the yoyo is right here, so you could draw a straight line, that would be the string, from this first finger to the yoyo, so now the string is parallel to the ground. The motion of the yoyo at that instant is going to be perpendicular to that. It is going to be straight up. If you wait until the string is parallel to the ground and then you give the yoyo string some slack, the yoyo is going to continue to move in the direction it is already moving, which is upward, and that will allow the yoyo to go straight up.

If you wait just a little bit longer so that the yoyo orbits and it is above your opposite hand first finger, now if you were to draw a perpendicular line, that will be straight across. So, if you want to do a horizontal Eli-Hop you can give the yoyo string some slack at that moment, bring your hands back together then, that will will allow the yoyo to continue in that direction so you can perform a horizontal hop.

Watch this. If you actually bring your hands together very quickly the yoyo will actually move in this direction because that is the beginning of the arc. Again, if you pull and you bring your hands together very quickly, see how it started to move that direction. If you wait just a little longer the yoyo can go up, and if you wait even longer that is how you get the yoyo to go in the opposite direction. There is very subtle timing that takes place, but eventually it becomes mechanical to you and you don’t need to think about it anymore.

If you do want the yoyo to go straight up, another thing you can do besides getting the timing right as far as when you bring your hands together, is you can actually lift your opposite hand a little bit. That kind of gets the yoyo going in the right direction so that it is a little bit easier to direct it where you want it to go. Same thing if you want it to go to the outside. You will notice that I am moving my hand in that direction at the beginning, and that seems to help as well.

If you put all of these different things together, you keep your hands all lined up, you bring your hands together at just the right moment to get the yoyo to go up, you pretty much have everything in place you need in order to do a sideways Eli Hop as well. You already know that if the yoyo is going to arc around your finger you need to wait until the yoyo gets over here and then you start bringing your hands together, and the yoyo will continue in that direction.

If I were to show you a sideways Eli Hop one thing that you might notices is that the yoyo follows the exact same path coming back to me as it does going out. What that means, again if you are just thinking about how the yoyo is moving up and down as I shoot the yoyo up, I try to stop the yoyo at the very moment it stops moving upward. As I pull it down, the yoyo is accelerating downward because of gravity, and it just so happens to follow that same path. The other thing that I do as the yoyo is coming down, I make sure to bring my hands down so that they will be lower than the yoyo, so that it still has a way to fall down onto the string.

That is the way I typically do sideways Eli Hops, but some other guys, and you can do this yourself, they actually do something different. Instead of shooting the yoyo above their hand so that it has some room to fall down, they shoot the yoyo below their hand. When it reaches the end of the hop they lift up a little bit. That looks like this. You can see my hands are going way up as the yoyo gets to the end of the string. The reason I am doing that is I am trying to lift the yoyo up so that it can go up and then back down onto the string.

Either way you do it, you really need to be thinking about how gravity is affecting the yoyo and compensating for that, but that is all the pieces put together. You need to think about the timing of when you bring your hands together, make sure you are pulling the yoyo back soon enough so that it does not drop below your hand as it is coming back. It can also help if you drop your hands a little bit.

Keep practicing those things. What I would recommend when getting started with the basic Eli Hop, just try to get it higher and higher until you have control. Then you can start experimenting with the different sideways Eli Hops until you find something that is comfortable.

That is Eli Hops.