Check out the all new Exia colors available on our website! Another great run in the Craft Yoyo area.

Join us on Discord! 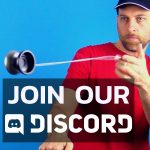 Exia Yoyo Yoyo TrickJoin the YoYoTricks.com Discord for the place to talk everything yoyo (and kendama, and magic, and juggling). It’s a great way to get engaged with the community, get help, and stay update to on news!

Check out the all new Exia colors available on our website! Another great run in the Craft Yoyo area.

Join us on Discord!

YoYoTricks Discord Yoyo TrickJoin the YoYoTricks.com Discord for the place to talk everything yoyo (and kendama, and magic, and juggling). It’s a great way to get engaged with the community, get help, and stay update to on news!

– Get the all new yoyo Jake used to win, the Atlas Yoyo by YoYoFactory –

At the annual World Yoyo Contest – which was held this year in Japan from August 13-17 – Michigan native Jake Elliott pulled off the most narrow victory in world yoyo history. In the exciting Freehand style of yoyo play, where the yoyo is not attached to the player’s finger, Elliott edged out the six-time world yoyo champion from Japan, bringing the title back to the US for the first time since 2007.

A Victory Worthy of Rocky Balboa

In order to win, Jake Elliott had to overcome yoyo legend Takeshi Matsuura. Takeshi has dominated the Freehand division at the World Contest since 2008. In the yoyo world he is the equivalent of snowboarder Shaun White, or olympic swimmer Michael Phelps. Yoyoers know Takeshi as a fierce competitor who consistently wins by wide margins, and who routinely reinvents his tricks and style from scratch to intimidate and wow the best players in the world.

Like Rocky defeating the Russian, Jake had to meet Takeshi on his own turf in Japan. Battling jet lag and unusual surroundings, he had to rely on the 4-6 daily hours of practice he had put in since losing to Takeshi in 2014. While most players cannot afford to devote this much time to yoyo practice, for Jake yoyoing is also part of his job. He works full time for YoYoTricks.com where he makes videos teaching yoyo tricks online.

The Path to Victory

Every day Jake wakes up at 6:00 AM. The quiet morning hours help him focus on practicing his routine and creating new tricks. Leaving nothing to chance, Jake developed his own blend of yoyo string that he makes by hand. Since the yoyo is not connected to his finger, a counterweight is attached to the end of the string, which can be manipulated separate from the yoyo. Jake also designed his own counterweight which includes a ball bearing to reduce string tension.

Using his contacts through YoYoTricks.com, Jake, a licensed machinist, has been working with various yoyo designers for the past year to create a machined aluminum yoyo that can maximize his potential. In the end he settled on a yoyo design featuring a “super-wide” profile, which helped to make his execution of risky tricks more consistent. He decided to name this yoyo the Atlas.

The first time Jake stepped on the World stage in 2015 was in the semi-final round. A mistake on his first throw killed the yoyo’s spin, threatening to derail his path to victory. With the clock ticking down he quickly restarted and landed the rest of his routine well enough to earn a spot among the top ten players who would compete in finals.

In the final round Jake performed a nearly flawless routine as the crowed responded with gasps of awe and shouts of excitement. The final score showed that Jake’s tricks were the most innovative of the contest, and the most expertly executed. Nevertheless, Takeshi’s “technical” score bested Jake’s, giving their overall scores a near mathematical match. To decide the winner the judges had to calculate their scores down to the hundredth of a point. In the end Jake was declared the winner by .03 points, on a scale of 100 total points, the most narrow victory in World Yoyo Contest History.

In the end innovation, determination, and execution all came together to make the unlikely possible, as the World Yoyo Title now is back in the hands of the United States.

Come see Connor, Jake, and Adam at the MER Yoyo Contest on July 11. Earlier this year we were approached by Catchy Kendama. They asked us to use our experience and skills to make a kendama video tutorial website. After playing with the kendama and seeing how much fun it is, we agreed.

The kendama is a super fun traditional Japanese skill toy that closely resembles the classic ball and cup game. We spent a lot of time this year learning about the kendama and practicing tricks. We were amazed at just how much could be done with the kendama and are confident that this is something our users will love!

So, we are building LearnKendama.com.

Support Us on Kickstarter

Our long term aim with LearnKendama.com is to build the most thorough and engaging place to learn kendama on the planet. In the short term, our goal is to get kendamas into the hands of interested people, and have enough tutorials released on LearnKendama.com by Christmas to familiarize those players with the fundamentals.

To do this, we need to raise enough funds through our KickStarter campaign to launch LearnKendama.com and to supply our initial stock of products. This will allow us to make LearnKendama.com as good as possible and make tutorials for the foreseeable future.

Be a part of something new, support the LearnKendama.com Kickstarter Campaign.

Comments Off on YoYoTricks.com is doing something new, teaching Kendama
Category: YoTricks News

Download our Android app from the Google Play Store

Download our Android app from the Amazon App Store

We have been working hard to continue improving the website and the mobile yoyo experience. In addition to an updated iOS app with improved performance, we are especially excited to announce that we have launched an update for our Android app with a completely redesigned interface.

This version of the Android app has been updated with an all new interface that greatly improves the user experience. There is now an easy way to view the latest video release and browse for tricks by category.

Beneath each video we feature the yoyo used in the video, or we recommended a yoyo ideal for learning the trick. There is also quick access to our online store so you can purchase yoyos right from your phone or tablet.

With this most recent update, it is now easier than ever to learn how to yoyo anywhere you go, all you need is an internet connection. Download our app now from the Apple App Store, Google Play Store, or Amazon App Store.

Comments Off on YoYoTricks.com On the Go
Category: YoTricks News 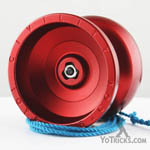 We just put out the 2014 Winter-Spring Buyer’s Guide and are happy to say that the Civility Yoyo topped the list along with the Prodigy as the most recommended high-end metal yoyos.

The Civility looks very similar to One Drop Project, not surprising since Colin Leland had a big hand in designing this throw. However I should mention One Drop did not participate in the production of the Civility. The Civility has very simple elegant look to it. The finish is beautiful and the anodizing feels flawless against your skin. This throw begs for grinding, and speaking of grinding I was able to pull off thumb, finger, and arm grinds with ease. With its slightly rounded and gentle V-shape, the Civility felt very comfortable and stable in my hand. It never felt like I didn’t have control of this yoyo.

For a 69 gram throw one may worry that the Civility will feel too heavy during play. One might also fear that your finger will take damage during extended sessions of play. Well….. one would also be wrong! Honestly the weight distribution on this throw is great! If I did not know how much this yoyo weighed, I would have guessed it was more in the range of 66 grams rather than close to 70. I was able to go through my trick sets without issue. Speed combo, slacks, whips, and technical tricks all went smoothly. So I decided to try out this throw in the arena it was specifically designed for…..learning tricks. I chose 3 random *new* tricks off the net and attempted to learn them. I was very impressed with how this throw reacted during this experiment. During long pauses the Civility kept its very powerful spin. I was also able to correct my position on the string very easily when landing badly. During all 3 tricks there was never a time I didn’t feel in control of the Civility. While spinning at the end of my string I didn’t notice any wobble. It spun so smoothly and for such a long time, if it weren’t for the slight clinging of my bearing I would have thought it stopped.

While the Civility does not come in a splash design colorway, nor is it the most flashy throw on the market, it definitely accomplishes what it was meant to be….a great metal throw for someone who wants to learn complicated tricks. With a price tag of just 90 bucks I would say it is competitively priced compared to other throws in its category. This fact alone might just be the tie breaker for someone who is in the market for such a yoyo. However, with better known models and brands out on the market, only time will tell how well this throw ends up selling. While I don’t think it will end up as my *Favorite Yoyo Ever* I definitely have to say the Civility has found its way into my daily rotation for a very long time. The Civility is definitely a pleasure to throw and I suggest picking one up if you have the means.

As an update, I am still using the Civility and it continues to be in my daily rotation. I am even thinking about buying a second one. That Civility is something to be proud of!