The Basic Throw Yoyo TrickOne of the most important skills for a yoyoer to develop is a good throw. Now we may really feel like we’ve accomplished something if we can do this, but, if we’re trying to learn tricks, that’s not gonna help us at all. So, if we want to learn to have a good throw actually the first thing we need to do is make sure that we’re holding the yoyo properly. So, if your palm is up, the way the yoyo should be sitting the string should be going over the top of the yoyo if you flip it over you’ll see that the string is going underneath. And, if you throw the yoyo like that, more often than not, especially if you’re a beginner, the yoyo is just going to spin out at the bottom. So, if that’s happening all the time when you’re throwing it, chances are you’re holding the yoyo upside down.

So, just flip it over so the strings going over the top then when you throw it it’s just going to roll off your hand really nicely. So, our basic throw is just to make a muscle, we’re gonna extend our hand when the yoyo gets to the bottom we’re gonna turn it over and pull it up to catch it. It’s really important at this point that you’ve already adjusted the string for your height otherwise when you throw the yoyo down to make sure it’s not going to hit the ground you’re gonna raise your hand up higher and higher and your gonna have to learn all your tricks like this… I’ve seen it done before but it’s not the best way.

So, if our string is adjusted we’re ready to learn our throw. Just throw it out, turn your hand over to catch it. Once you get used to this, the you’re also going to want to make the yoyo sleep. Sleeping is where the yoyo spins down there at the bottom of the string. One of the problems with getting the yoyo to sleep is that the harder you throw it the more difficult it is to make it sleep. That’s because when the yoyo hits the bottom of the string it has a tendency to bounce and if it bounces it gets slack in the string, if it gets slack it’s gonna wanna come back. So what you need to do is compensate for that bounce with your yoyo hand. If you watch when I throw it you’ll see that I do just a little up and down motion – I’m cushioning the yoyo when I throw it. And that cushioning effect, it takes a little while to learn, but, once you perfect it, it will work no matter how soft, or how hard you throw the yoyo.

Once you’ve got the sleeper it just opens up a whole world of tricks for you to learn. 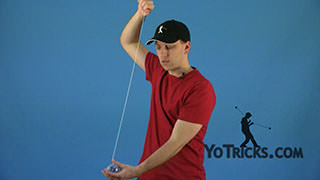