Learn how to do a useful weave trick: Letter A. 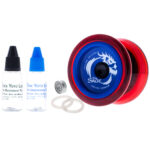 Letter A Yoyo TrickThis trick is called Letter A, and it looks like this:

As you can see, this is a weave trick, and you can also do it in different mounts. I am going to show you in a 1.5 mount as well. That looks like that. You can see it gets you right back to your 1.5 mount.

Since this is a weave trick, we do recommend that you go check out our videos for Crazy Eight as well as Figure Eight. We give you some good tips in there for how to break down weave tricks and solve some problems you might run into. So you definitely want to check those out.

For the single mount version of this trick, the first part is really just a roll. You are just going to roll it to the outside just like this between your hands. Again, unlike a flip, this string is not going to wrap around your finger, but instead you just keep your finger pointed forwards so that the yoyo can roll right in between your arms. That just achieves the first roll. That does get you back to the trapeze. For the second roll, what you are going to roll is turn your hands around and this time you are going to roll the yoyo behind your opposite hand. You can see that when you do this, you get a little twist in the string. When you do that roll, you need to point your finger down and then rotate it all the way around so that it is pointing forward again. You want to do that during the roll. That way you get back to your trapeze. Once you have got both parts down, you can put them together. That makes a really smooth motion, like that.

The Letter A is a really nice trick to put into different combos. Because you always end up exactly where you started, no matter how you do the Letter A, it is a really good thing to add into sets of tricks, if it has either a single mount or a 1.5 mount. It just adds a really nice flow to your tricks, so it is a good trick to learn. And that is the Letter A. 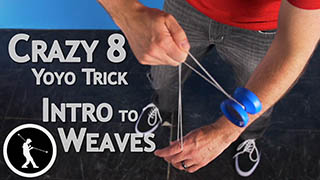 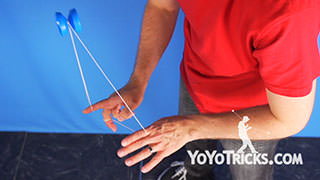