Magic In This Video: 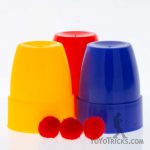 Magic Ball and Cups Magic TrickI’m going to show you guys a classic magic, three cups, three balls, I pour them out, one two three. And if I take this cup, I put it down, put this cup down, and I’ll cover up the ball in the middle. I can take one ball place it on top, take a cup, stack it, flick!, and the ball will pass through so there are now two balls underneath. Put all three balls in, three cups, three balls, one two three, we can change things up a little, we can cover up each and every one, and if I want I can take this and pass it, and I’ll pass to here, and of course we have two balls underneath.

I can pass back, and I can pass this back, and now we have one and two balls underneath, I can take one again and put it on top, cover up, give it a flick, the ball passes through and we have one two three balls. I can pick them up, place them back in, put the cups on, and this time, let’s make one of the balls disappear. So I can take this cup here, I’ll cover up the one in the middle, and put this down. So to make one disappear, We’ve got one two three balls, I’m going to pick up two, put them on top, cover up with a cap, give it a little flick, but only one flick because we only want one ball to go through, and then we’ll take the other ball, pick it up, throw it away, and there we have two balls with one ball disappeared.

No we can stack there in, one, two, and what we’re going to do this time is we’re going to place this down, we’ll place this one over here, and we’ll take this bottom cup, cover up the ball, we’ve now got one ball, two ball, but I’m going to take this, stack it up, give it a flick, grab that other ball, throw it in, and we have three balls underneath.

So to do this trick, there’s one little secret you need to know, which is that you show your audience members one two three balls, but the secret is that there is actually a fourth ball. And all you need to know to be able to do this successfully is how to do this one thing. That’s it. It’s really simple as that. All you need to do is put all of the other balls away and just practice having one ball inside you’re cup, and turning that ball over, and being able to do it in a variety of ways without the ball falling out, without your audience members knowing that there is a ball. The other thing that will help is that if your audience members are say in front of you, is practicing turning the cup in the a way that they face toward you, that makes it more difficult for the audience members to see, and you wanna make sure that you turn the cups in the same way at the same pace, and that’s as simple as the trick is. The rest of the trick is really just about patterns and it’s about creating a good routine that’s believable, using good talking and hand gestures, and that’s how really all you do make a magic trick believable.

So I’ll show you guys one basic pattern that you can do with this, and then you can experiment and you’ll come up with lots of patterns all on your own. So one is that you want to put one ball into one cup, and you’re going to stack the cups up. And the basic way is to have the one ball in the middle cup. And you’re going to put three balls into the top cup, and the bottom has no balls in it at all. And then you can dump the balls out and space them out one two three, I find counting helps my audience to believe what happens so I often count the balls, and then you can take the cups and place them down, one, and then I take the bottom one off, and I like to place it over here, two, and then I’m going to use the middle cup to cover up the middle ball and place it down, three.

From there I’m going to take this one over here, place it on top, pick up the cup, cover it up, wave my hand, flick the cup, and tell the audience member that the ball has passed through the cup so that there are now two balls underneath. Now we still have a total of one two three balls. I’ll put them in the red cup, pick up the blue, place it underneath. So the red cup has three balls, but you’ll remember that we still have one ball underneath in the yellow cup, and so our setup is actually exactly the same at the end of that, we have three balls, one ball, and no balls. So you can repeat the trick as many times as you want, and start creating some variations.

There are no magic tricks you need to know before learning this trick with your magic.