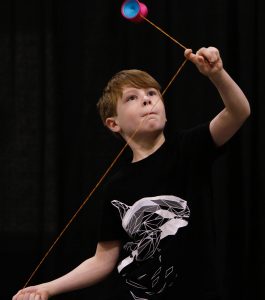 On Saturday, November 17th, the annual Illinois State Yoyo Contest will be held at the Chicago Toy and Game Fair at Navy Pier in Chicago.

Every year dozens of new and seasoned yoyo players meet at the nations largest consumer-friendly toy fair to impress friends and passers by with their “mad yoyo skills”. Spectators will see players compete with one or two yoyos, even yoyos flying off the string (intentionally, in most cases), all with trick complexity and speed that makes one wonder – have yoyos suddenly transformed from a national past-time to an extreme sport?

All ages are encouraged to watch or compete. Prizes are awarded for the best player at every age, so younger players have an especially good shot at winning. There is no charge to watch after you have entered the fair. Players can compete for $15.

The contest is run by YoYoTricks.com. At their booth World Yoyo Champion Jake Elliott will be giving free yoyo lessons throughout the entire fair.